What to do about recommendations containing potentially harmful adware?

So, I'm rather surprised this hasn't been discussed already (it hasn't been as far as I can tell). What do we do if an answer to a question recommends a piece of software that, for example, contains Adware or something else bad during the installation process? Should we make note of this?

As an example, someone posted Windows program for viewing which program is using a file recently. The top answer now recommends Unlocker which has four upvotes. Unlocker is a notable piece of software if not just for the awful adware it attempts to shove down the user's throat during the installation process.

I personally don't think we should be supporting software like this, or, at least, the answer should contain something along the lines of

Note: This software contains potentially harmful adware. Install at your own risk.

What actions officially are we to take against these recommendations?

Edit: To give a better example of the kind of adware encountered in Unlocker I ran through the installation in a virtual machine and took some screenshots of the ads. 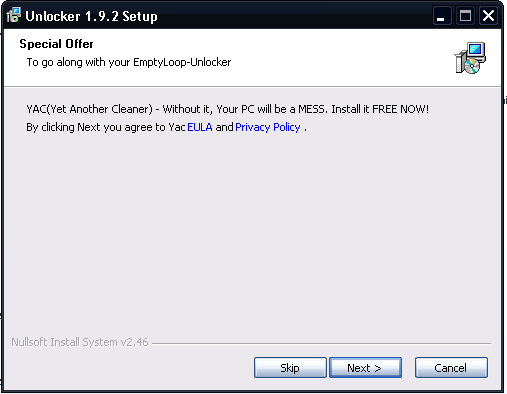 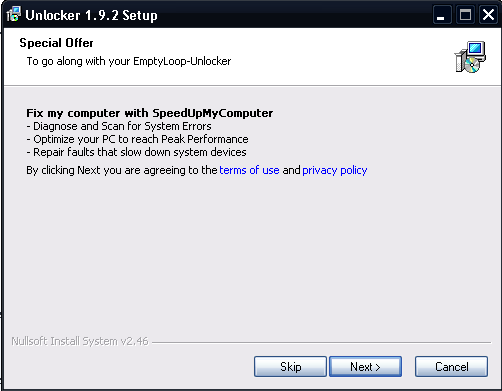 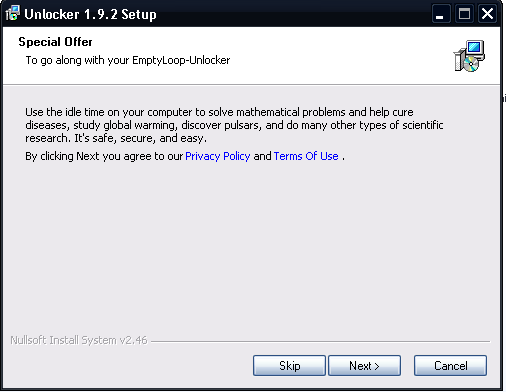 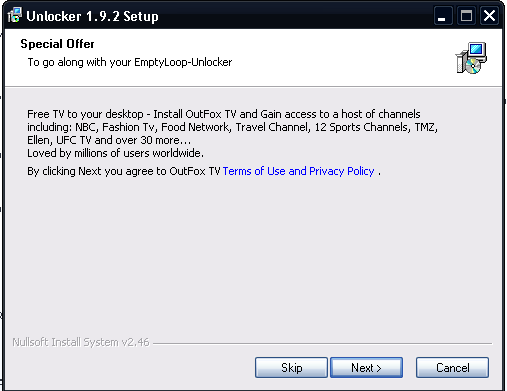 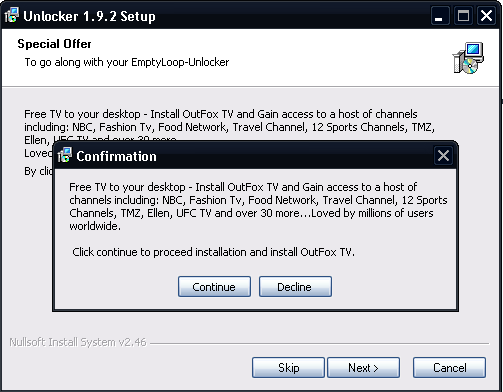 I don't think we should be deleting such answers on the spot. I believe that this mSO answer applies here.

An answer that is not an answer should be deleted (should be a comment, doesn't answer the question etc...).

Answers that are answers but are factually wrong or are actively bad (say promote SQL Injection) should get downvoted, but not deleted.

The standard for dealing with these kinds of answers is to downvote, and (if it's really bad) a warning comment.

It would be nice if answer authors would put the warning in themselves. If they get the comment, they might. At this point, though, I don't believe we should be going around editing this into other people's answers, either - this is the kind of thing the voting system is built for.

This kind of information should be mentioned in the answer, so that readers can make an informed choice. The (approximate) cost of a piece of software needs to be mentioned in an answer, whether this cost is measured in dollars or ads.

Given the facts you present here, if you see an answer that mentions Unlocker, you should ensure that it mentions the ads. Edit that in if necessary. Remember to make sure to respect the author's style, and don't overdo it. For example, given

you can edit to

You can use Unlocker, which can be downloaded for free. The installer prompts you to install adware, make sure not to accidentally install it. Unlocker does this and that…

UNLOCKER HAS ADWARE!!! DONT INSTALL IT!!!

As I wrote in my comment on Undo's answer, I think we must differentiate:

Beware: This software contains potentially harmful adware. Install at your own risk.

As for downvotes: I wouldn't generally downvote this kind of question. It might well be the author wasn't aware of the issue, or simply forgot about. Showing ignorance (or incidentally placing bad information) is something else, as is bad quality etc.

Not the answer you're looking for? Browse other questions tagged discussion answers answer-quality .

27
What to do when an answer contains several suggestions?
2
What is so bad about this question?
7
Would plugin recommendations about Minecraft be on topic?
41
What is required for an answer to be high quality?
2
People don't think about questions and answers
3
What should be done about questions with potentially unreasonable multi-platform requirements?
6
What should our /about contain?
23
Are we becoming lax about answer quality?
10
Asking questions about potentially "bad" software?
9
2018 Moderator Election Q&A - Question Collection