In the first image, I've noticed the first time text like "-1 down vote favorite" written before the beginning of the question's body. It's not shown in the snippet of other questions listed in newest questions tab. 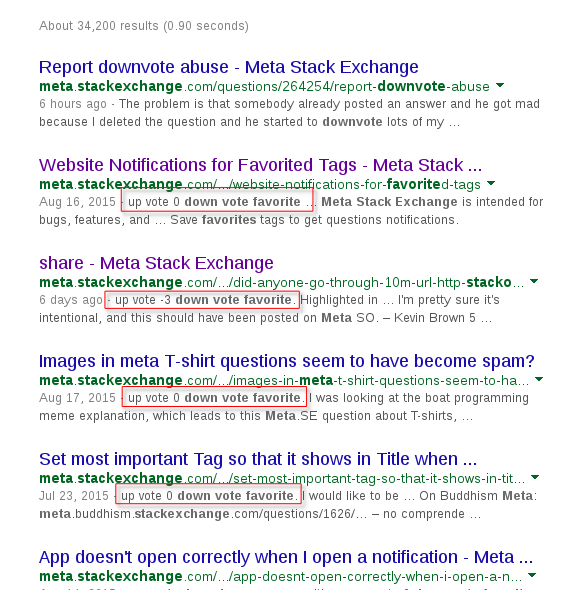 Was that a glitch or intended behavior by the system?

“up vote score down vote favorite” appears at the beginning of a questions when the asker carelessly copied a question from Stack Exchange. To reiterate, this appears because it was put there by the asker.

The asker must have realized that within 5 minutes of posting (note that you saw the question when it was less than 5 minutes old). Edits made within 5 minutes of the initial posting are not tracked separately, the edit overwrites the stored initial revision; this is intended as a grace period to fix obvious problems without leaving a permanent record. You also get a grace period after an edit that was recorded. The grace period is reset by some activities such as an edit by another user, or an answer or a comment being posted.

Google indexes the site very quickly, and doesn't necessarily notice grace period edits since they don't update any timestamp, so it may keep the pre-grace-period version in its cache for a while.

Not the answer you're looking for? Browse other questions tagged support .

3
Commitment and Invitations
2
When should I delete my own question?
1
Bounty question?
1
Broken question migration?
3
How were those questions modified by 1 rep user Megan?
2
Where did the question edits go?
0
Can I search for, or be notified of, bumped questions?
3
Product names in question titles / "Alternative to ..." titles
2
A moderator delete my answer and I diagree with his decision. How can I contact him?